Test. Switch Sports, the return of a myth on hybrid console!

Whether we liked the Wii Sport license or not, it is undeniable that Nintendo’s title has shaken up the video game industry as a whole. Because with this production, the Kyoto firm had launched at the time a new way of playing, more sporty, with motion detection, now democratized. So inevitably, when the Switch welcomes the third installment in the series, the expectations placed on it are high. Also, so many years later, does the sauce still hold? Answer, in our Switch Sports test.

Switch Sports: 6 activities including 3 new ones

For two weeks now, Switch Sports has been available, exclusively on Nintendo Switch. And during this short fortnight, we had the opportunity to try the software solo but also, with others, with one of the game’s targets, children. Also, in this test (at the end of the article), we will give you the impressions of a 6-year-old boy, put to work for the occasion, in addition to the verdict of the experienced player – and adult.

First of all, to set the scene properly, know that six activities are in the game, in addition to a seventh (Golf), which will appear later, through an update. They are all playable online or locally with several people (2 to 4). At the moment, therefore, we find the following sports there; Football, volleyball, bowling, tennis, badminton and chambara. Regarding tennis and bowling, you know them for having played them in the first two opuses, released on Wii. For its part, the chambara (sword duels) was present in Wii Sports Resort. On the other hand Football, volleyball and badminton make their appearance. three completely new activities. 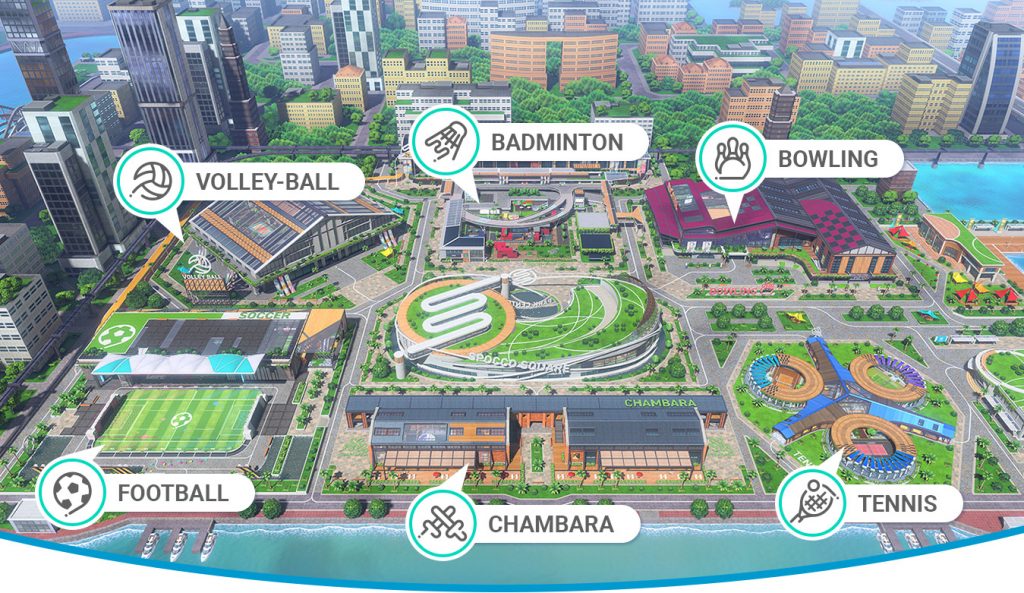 We will therefore focus, initially, on these last three. And in particular on Football, perhaps the most fun of all. The only regret is that the movement function at the level of the leg is only reserved for the penalty shootout mode. While we hoped to be able to play on foot during matches. Is there an update planned to fix the problem? To be continued. The fact remains that, strap attached to the leg, especially with several people (locally or online), the result is more than convincing! With friends or even, his children, we get off (ha, ha, ha) in front of the cage. Always in a good mood and with this intensity, this stress, which almost all of us have experienced in front of a penalty shootout from our favorite team. Concretely, the motion detection responds well even if a slight latency is felt and requires a subtle anticipation of your movements.

Regarding the matches themselves, it gets more complicated for the youngest. Because the games are played exclusively with two joy-con per person. Of course, a tutorial allows you to quickly become familiar with the techniques and movements to be performed, but this remains difficult to integrate for children of 5 or 6 years old, not accustomed to video games. And then, having a character pull at the foot by making movements with the arms remains disappointing, in terms of immersion. However, the matches remain very friendly and pleasant to play, as long as you participate in them with friends/relatives. Clearly, the activity of Football could constitute in itself an argument for purchase, if you are fond of this sport. With a lot of possibilities since you can embark on a simple training session, a penalty shootout, four against four or one against one. Only one complaint, the fact of not being able to play it with four but only, with two simultaneously. 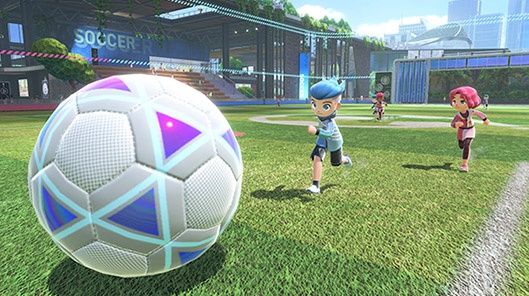 As for Badminton, here we are in the presence of the most accessible activity of the game and therefore, the most suitable for strictly all audiences. But at the same time, the latter relies on the speed of the exchanges, very dynamic and therefore, breathless. It’s fun, it fuses, it’s easy to handle and the motion detection is almost perfect. Simple, therefore, not necessarily great in the long term but very cool to play with a loved one passing through the house or a young player.

Let’s move on to Volleyball which, in terms of difficulty and accessibility for the youngest, is between Badminton and Football. This time, you have to memorize the different movements in order to execute services, smashes, passes or receptions. But concretely, it is often enough to gesticulate in all directions to get by. Something that allows neophytes to manage or even win. While the most experienced may remain on their end… And on the latency side, it’s okay but not perfect. Despite everything, the arrival of such an activity is refreshing and offers great tussles between friends. However, it would have deserved more care, in terms of handling, gameplay. 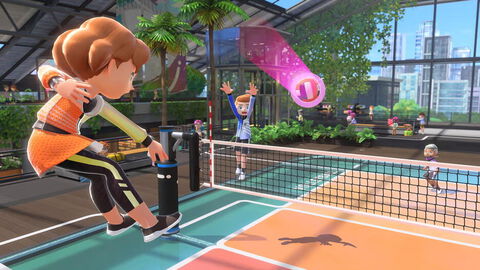 Now let’s attack the fundamentals, with Tennis first of all. Here, we have to do with a quasi-pasted copy of the original version, which was excellent at its base. Hence this identical version, which always has its effect in the living room. We would still have liked the latency time at the time of service to be less important. In 2022, we believe this is the minimum. Nothing insurmountable, rest assured, the games remain fun and friendly. But all the same…

On the other hand, on the Bowling side, there are a lot of improvements. Indeed, it is now possible to play two, three or four, simultaneously! That is to say, via a split screen! Ideal for those who don’t like to wait even if, in passing, you lose the spectator aspect, not devoid of charm either. But this traditional mode, with several alternately, remains in the game as well. In addition, an “obstacles” mode is appearing. Thus, obstacles appear on the track such as small barriers, holes, unevenness, etc. And in practice, it’s pretty awesome to play! Because, to succeed, it will be necessary to use the effects, more than before. A nice addition, therefore, which makes Bowling even more essential than in previous games. But above all, which considerably deepens the gameplay. 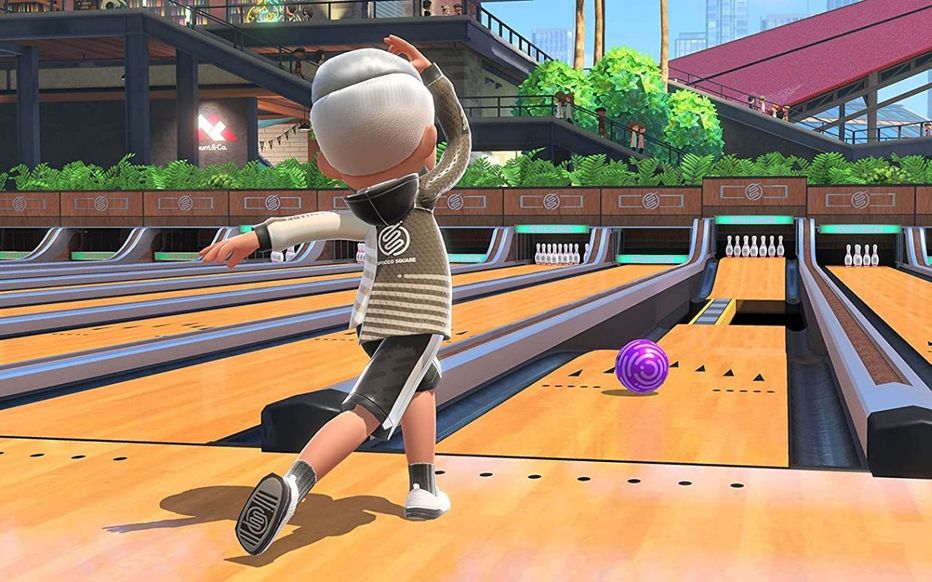 Let’s finish with Chambara, which is also evolving. First, know that this is clearly the most responsive activity, since the latency is virtually zero. This allows you to enjoy dynamic combat, based on reflexes with this alternation between defense and attack, just crucial. But here too, there are new things to report. Indeed, in addition to the classic saber, two new, more powerful ones (the energy saber and the double saber) are selectable. Knowing that each player can choose the one he wants. This also requires adapting to the opponent’s weapon and therefore showing a bit of thought before a confrontation. An intense, stressful activity, which has the merit, also and above all, of letting off steam. Ideal for our dear darlings and their overflowing energy, from morning to night! 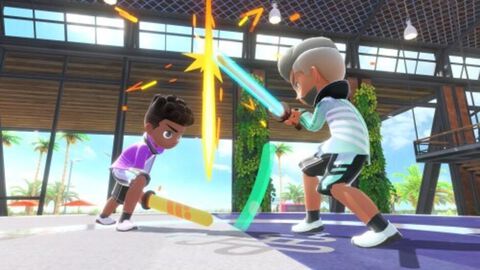 But Switch Sports is also a completely new visual coating. Thus, the sets have logically gained in finesse, with more details and animations than before. The visual slap? No, let’s not exaggerate. However, for this type of software, the result is largely sufficient and convincing. And above all, less simplistic than in the two previous episodes. In addition, the traditional Mii have left the place to let characters created for the occasion take center stage.

And these avatars will be able to evolve through clothing and accessories to acquire throughout the online games. Yes because, from now on, you can face other players, all over the world! And that, frankly, is a big plus, which greatly extends the life of the software, if you don’t have the opportunity to play several locally.

On the other hand, to come back to the content to be unlocked, it is unfortunately only possible to unlock the new outfits and others by playing online. That is to say, by enjoying a (paid) subscription to the Nintendo service. If this is not the case, then you will not be able to customize your characters. Hard, especially since this type of production should probably favor local play…

On the sound side, sound effects and music will not leave us with lasting memories. But the “Wii Sport” atmosphere is there, intact and we didn’t ask for more… 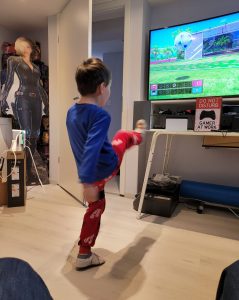 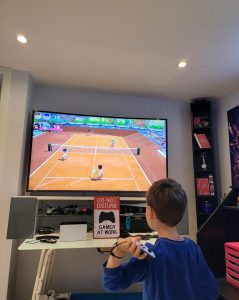 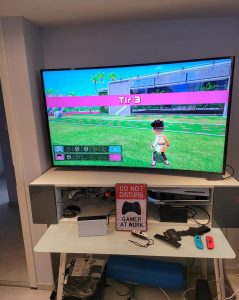 To conclude, let’s finish with the opinion of our junior tester, Clément, soon to be 6 years old. Clearly, the latter – who was touching a game console for the first time, not abnormal at his age – very quickly acclimated to software. Proof that the developers have designed something truly suitable for everyone. Even if certain activities (Volleyball and Tennis) remain a bit complex for a little guy under six years old, a neophyte in video games. On the other hand, the other four immediately deliver their effect, with profuse smiles, palpable excitement and the happiness of sharing such an experience with the family. The only danger is large movements and untimely movements. Yes, our Joy-con have been expensive, as well as the surrounding furniture! To frame well, therefore. The rating of our junior tester can be found below, in the rating section.