It was 2001 when an accident abruptly changed Carol Taylor’s career path.

Taylor, who is now living with quadriplegia, all of a sudden became paralyzed from the chest down after her spinal cord was severed. Her arm movement was limited, and she could no longer move her hands or fingers.

Gradually, after making some modifications to brushes and securing some specially-made tools, Taylor taught herself to draw, paint, and eventually, design clothing.

On Thursday, in a partnership between the Adaptive Clothing Collective and adaptive fashion brand Christina Stephensher designs will be showcased on the runway at Afterpay Australia Fashion Week (AAFW).

“People can expect to see quite a different collection on that runway as compared to what they’ve seen from us in the past,” Jessie Sadler, who founded Christina Stephens after her mother had a fall and dressing in her usual style became a challenge , tells 9Honey Style.

Earlier this year, Taylor – who, to her knowledge, is the world’s only quadriplegic fashion designer and who Sadler says has a very different design style to herself – was welcomed aboard Christina Stephens, who is NDIS-funded, as a partner in the business , lead designer and production manager.

“In my opinion, there is no substitute for lived experience of disability when designing adaptive clothing,” Taylor tells 9Honey Style.

While Taylor has no formal fashion training, she spent 20 years designing clothing for herself to suit her specific needs, and emphasises there are a lot of variables that need to be taken into account when catering to different disabilities.

“My hands are completely paralyzed, so, not surprisingly, buttons present a real issue,” Taylor says, explaining that since the button’s invention thousands of years ago, the design has “not changed much.”

“I love the bling of buttons but the convenience of magnets. Even though I might still need assistance with dressing, I fiercely cling to any single snippet of independence magnetic buttons or zips might offer.”

READMORE: ‘Why is the rest of the world finding fat women attractive but in Australia it really is a repellent?’

Highlighting the common – and life-threatening – complication of Autonomic dysreflexia in those who live with spinal cord injuries, Taylor says “good design” can assist with alleviating stimuli that may trigger the at times fatal sudden and extreme blood pressure fluctuations, which can occur without warning and can be brought on by “something as simple as temperature fluctuation.”

“A seam placed in the wrong position could cause a pressure injury resulting in hospitalization and knocking someone out of action for months,” Taylor says of how clothing can present a complication for those living with paralysis in the form of pressure sores.

Taylor herself spent a month in hospital last year due to a pressure injury, which she says she is still recovering from eight months later.

“Excessive fabric in the wrong spot can cause excruciating nerve pain, writing off any plans you might have had for the day,” she says.

Designing adaptive clothing should have accessibility and functionality front-of-mind, but that doesn’t mean flair or style should be sacrificed.

Taylor highlights how, with spinal cord injuries in particular, one can experience significant changes in body shape, and as a result, clothing choice becomes “all about the carer and nothing about the wearer.”

“To enable assisted dressing, retail items need to be purchased one or even two sizes larger than required to make it possible for someone else to navigate the item around elbows [or] shoulders,” Taylor explains, noting how prior to her injury, she loved all things fashion and style, and her injury did not change that. “This is where lived experience of disability can really make a difference.”

Despite the fact almost one in five Australians live with disability, Taylor felt “excluded from the fashion conversation” after her injury, and that’s what prompted her to design her own clothes.

“It’s my experience that people with disabilities want to be fashionable,” she says. “How you dress goes to your core sense of identity, your confidence, but most importantly, it has a direct impact on how the world perceives you and so frequently underestimates you. That’s how powerful clothing is!”

Taylor and Sadler’s designs with Christina Stephens will be showcased at the Adaptive Fashion Collective show in Redfern’s Carriageworks’ Gallery 1 at 10am on Thursday, and models include author and disability advocate Lisa Cox, doctor, lawyer, scientist and disability advocate Dinesh Palipana, artist and author Suzanne Berry, artist and influencer Emma Carey, and model Bella Herrmann.

While this year’s AAFW has also the event’s first size-inclusive runwayyou have seen mid-size models front and center and, for the second year, is hosting First Nations showcases, there’s still a call among fashionmongers for all runways to showcase models more reflective of the people on Australian streets, not just within specific shows.

To Sadler, however, not all of those categories can be included under one umbrella for some contexts. The need for a wider representation of models on all runways and the division between adaptive and ‘mainstream’ fashion brands’ showcases themselves are two related issues – but for certain practicalities in the market, they require more nuance than a blanket solution.

Adaptive fashion and inclusive fashion can still be universal fashion, and an example of this is Christina Stephens’ Leaf Back shirts and blouseswhich open completely at the back and are designed with customers who have upper-body mobility challenges in mind.

“When when we design a garment or a piece, we apply universal design principles wherever possible, which means we are creating a garment for our specific customer in mind, but we are considering scale and who else could enjoy that product or that garment outside of our immediate demographic,” Sadler tells 9Honey Style.

“Carers would benefit from [the Leaf Back shirts] in terms of ease of dressing and prevention of injury, but I wear that all the time and I don’t have upper body mobility challenges yet, but it’s just a good quality, sexy t-shirt that I can wear with jeans.”

While ‘mainstream’ brands should provide fashionable styles that cater to all and have runways that reflect those universal offerings, Sadler highlights there still needs to be a specific adaptive fashion market.

“For someone living with a catheter or a colostomy bag, of which there are many, many people, especially those who use wheelchairs, the design of those pants, that skirt, that dress needs to be specific for that need,” she says as an example.

To Sadler, the adaptive fashion industry – while it was estimated to be worth $US300 billion (approx. $432.6 billion) worldwide in 2021 and is expected to grow by 16 per cent by 2024 – is still in its infancy in Australia, and specific showcases like the Adaptive Clothing Collection runway provide an opportunity for larger retailers to become educated on what they too could be distributing to customers.

READMORE: Queen to miss event for first time in 59 years

“Our customers need to be able to go and shop in boutiques at Myer, David Jones, and have lunch with their girlfriends, mothers, touch stuff, feel stuff, try stuff on,” Sadler says. “They shouldn’t have to sit behind a computer and order clothing.”

Sadler also highlights the expense that comes for customers when they need to make a return due to sizing issues, as well as the logistics needed to organize the return – something that could be avoided with a trip to the store.

“Eventually, we want these runways to be integrated and be seen as mainstream, but we’re in a very nascent stage of the life cycle,” Sadler says.

“I think we need to shine a light on these categories that are emerging and aren’t yet considered mainstream so that we can educate potential retailers, who are learning and seeing what they need to know to be able to retail it.

“We have to start somewhere, and hopefully down the track I envisage that these categories would be entwined in mainstream fashion, but this is where we are today.”

For a daily dose of 9Honey, subscribe to our newsletter here. 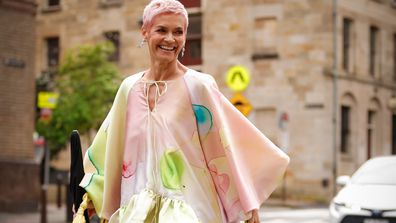